Find the best deals in Palermo

Palermo is the capital of the largest Mediterranean island, Sicily. With a population of over 650,000, it is the sixth-largest city in Italy. This puts it far behind the two leading cities of Rome (2.9 million) and Milan (1.4 million). Palermo is also the most populous city south of Naples, which has almost one million inhabitants. The area of Palermo, which forms an almost natural harbour for the ancient port, is surrounded by a small mountain range named after the city itself. Some of the mountains even share parts of the city as it has expanded over the years. The mountains are part of the Madonie Mountains, which cover most of Northern Sicily. The landmark of the city is Monte Pellegrino - it is located on the bay of Palermo and offers a remarkable view of the city and the sea and also houses the famous Saint Rosalia. Thanks to its southern location and local climate systems, including its proximity to Africa, the Palermo area has some of the best weather in all of Europe! Summers are long, hot, and dry, with temperatures staying mostly in the 20s from May to October. There are more than 2,500 hours of sunshine in Palermo each year and it rarely rains during the summer months. The history of Palermo is one of the most unique and varied of any major Italian city. Ancient Greeks, Romans, and Byzantines strongly impacted the city and left their mark in the form of unique buildings. However, the greatest influence on the region was the Arab civilization, which made the city the capital of a Sicilian Emirate.

Most popular car hire at Palermo

The most selected hire car in Palermo is the Fiat 500, Fiat Panda and Renault Clio. Renault Capture is also a popular option. The most popular car types in Palermo are Economy and Mini.

Want to rent a car for a one-way trip? No worries! Orbit Car Hire offers a variety of one-way Car Hire options in many locations outside of Palermo. One-way car rental is ideal for cross-town or cross-country travel, saving time by not returning to your original location. Start your reservation with Orbit Car Hire and find great options on one-way car hire at locations across the Italy.

Top 7 things to see in Palermo

The cathedral of Palermo is one of the most important architectural monuments of Sicily. It was built in 1184 by the Normans as a converted Christian church on the site of a Muslim Mosque previously built over a Christian basilica. This cathedral is a must-see when you visit Palermo!

The Teatro Massimo is Palermo's dominant opera house and performance hall for ballet. It was built between 1875 and 1897 and completely renovated in 1997 for its 100th birthday. It looks stunning and, to many American patrons, strangely familiar. The familiarity of the Teatro Massimo stems from its role in The Godfather: Part III, a fact you can use to lure non-opera lovers and teenagers in the door.

The Church of the Martorana, also known as Chiesa di Santa Maria dell'Ammiraglio, is simply breathtakingly spectacular. In the heart of Palermo, opposite the church of San Cataldo, this little church is a must-see when you visit this city. Do not be fooled by the plain exterior, because what awaits you inside is breathtaking.

The royal palace or Norman Palace of Palermo was built on the highest point of the city, above a Punic enclosure discovered in 1984 (it is in the territory of the Duke of Montalto Halls). During the Arab domination, the first nucleus was built between the rivers Kemonia and Papireto with typical defensive features, which is why it was called "Qsar", a term that in Arabic means more than a castle, but also a fortress for military purposes.

Officially called Piazza Vigliena but affectionately known as Quattro Canto (four corners), this beautiful baroque quarter of Palermo marks the intersection of two of the city's most important streets - Via Maqueda and Corso Vittorio Emanuele. Each of the Quattro cantos is adorned with statues of the four Spanish kings of Sicily and the four patron saints of Palermo, as well as symbolic representations of the four seasons - a masterpiece of the rich sculptural heritage of the period. As the gateway to Palermo's atmospheric historic district, Quattro Canti is the ideal starting point for your explorations of the atmospheric and centuries-old city centre, Vecchio Centro.

The Fountain of Shame

The Pretoria fountain, created by Francesco Camilliani, arrived in the Sicilian capital in 1574, after having embellished a beautiful garden in Florence for a few years: it was transported to the island in pieces-644 pieces, to be exact-and reassembled in its present location. The Senate of Palermo had bought it from the original owner, who had to solve his financial problems and pay off his debts. 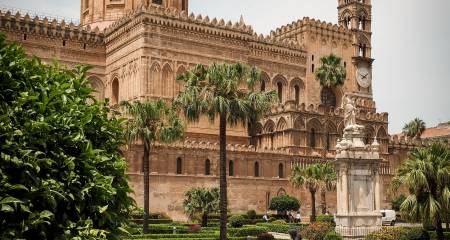