Find the best deals in Mérida

Mérida is a city in the western part of central Spain and belongs to the province of Extremadura. Two important rivers, the Guadiana and the Albarregas flow through the city. These two rivers played an important role in the founding of the city, whose beginnings date back more than 2000 years.

If you have decided to take a road trip through the Estremadura, Merida is one of the places to see. It is considered the heart of ancient Spain, where you will find a variety of remains from the Roman era, Gothic buildings, Roman walls, temples, monuments, as well as beautiful nature, mountains, rivers, forests, and, of course, excellent cuisine.

In addition to the Roman sites already mentioned, which are spread all over the city, you can also visit many museums here, which have a rich collection of exhibits worth seeing. Moreover, the city hosts various festivals throughout the year, offering visitors a variety of cultural and entertainment content that evokes the unique atmosphere of this still vibrant Roman city. One of the most interesting things is that the Roman remains are very well preserved. For example, the Roman Theater, which was built more than 2000 years ago, is still in use today and every year a theatre festival is held here where this ancient Roman theatre is one of the central venues.

So if you have rented a car and are heading out to explore Spain, Merida is one of the places worth visiting. You will get to see a different, new face of Spain that you have not seen elsewhere.

To drive a car in Mérida you must be 18 years old, have a valid driver's license, and show valid proof of insurance for the vehicle you are driving. In Mérida, vehicles drive on the right-hand side of the road. The speed limit on the motorway is 120 km/h (75 mph). On normal roads the speed limit is 90 km/h (75 mph), on urban roads, it is 50 km/h (50 mph), and on all other through roads, there is a speed limit sign.

It's good to know that Spain has strict drink-driving laws, allowing only 0.5 milligrams of alcohol per milliliter of blood - stricter than in the UK, where the limit is 0.8. Novice drivers are effectively banned from driving under the influence with a very low limit of 0.1 mg/l. Seatbelts front and rear are compulsory everywhere.

If you are caught speeding in Mérida, the Spanish police act very quickly, and lack of Spanish is not considered an excuse. The police do not mind that you are a tourist on holiday, and fines are often issued immediately unless you can prove that you are a permanent resident in Spain. If you receive a fine, make sure the officer gives you an official receipt and if you pay immediately, the fine is usually reduced by 20%.

Most popular car hire at Mérida

The most selected hire car in Mérida is Ford Fiesta, with Renault Clio and Seat Ibiza also being a popular option. The most popular car types in Mérida are mini, economy, and compact.

Want to rent a car for a one-way trip? No worries! Orbit Car Hire offers a variety of one-way Car Hire options in many locations outside of Mérida. One-way car rental is ideal for cross-town or cross-country travel, saving time by not returning to your original location. Start your reservation with Orbit Car Hire and find great options on one-way car hire at locations across the Spain.

What to see in Mérida

The museum of Roman Art

Museo Nacional de Arte Romano or the National Museum of Roman art is a tribute to Roman ingenuity and achievement. The museum itself offers a very attractive appearance that is a blend of ancient and modern. Inside, you can expect to see an impressive collection of Roman remains from the wider area. Apart from tools and accessories, there are also works of art such as various sculptures and paintings on display.

Undoubtedly, the 850-meter long and 25-meter high aqueduct is one of the highlights of human civilization in Roman times. It is a sight you must see. It is on the list of sacred heritage and at the time of its construction it represented a technological and architectural surplus and, of course, a step towards the modern world in terms of water supply.

One of the architectural marvels of the Romans is also located in the city center and is still actively used today. Every year a theatre festival is held here, showcasing performances from all over the world. The theatre is very well preserved and part of it has even been restored as it started to sink into the ground throughout history, but at the beginning of the 20th century, it was protected and restored with the right approach so that it can be seen by tourists today.

The bridge itself is interesting mainly because it is considered to be the oldest bridge still in existence from ancient times. Today, the bridge is open to pedestrians and offers beautiful views of the countryside and the river that flows under it. At the same time, it is also considered a very popular photo motif, as most of the photos on Merida's social networks appear directly from this bridge.

Originally, it was mainly used as a venue for chariot races. However, its use was later expanded. Among other things, it was the site of sea games. It is considered one of the best-preserved circuses from the Roman period. There is still a preserved place for chariots, entrances for the competitors, and stands for the spectators, divided into both seats and stands. 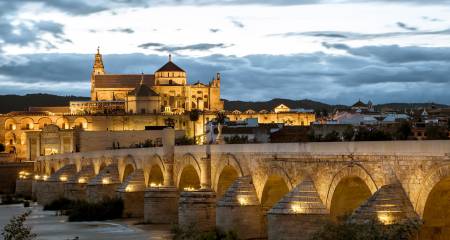