Funchal, the capital of Madeira island is said to be Europe‘s most beautiful and cleanest capital. We totally agree with that statement. This spectacular city has a lot to offer, many places to visit, things to see. Read on and we will tell you all about the city of Funchal and it‘s attractions and activities.

In this city of 112,000 inhabitants, you will find that Funchal is very modern, mixed and refreshed. Very different from the old Funchal, which was once inhabited by pirates. Today, the city is known for its wide range of world-class restaurants, stunning hotels and extreme natural beauty.

Over the years and decades, Funchal has become one of the main ports for cruise ships on the Atlantic. The port is located in the middle of the city, making it easy for travellers and crew to enjoy Funchal's city centre. It has become a tradition for most European cruise ships to dock in Funchal on their maiden voyage. It is worth noting that the Funchal dock is considered one of the most spectacular docks in the world. It is very common for more than four cruise ships to dock in Funchal at the same time.

The city is built in an arch and offers breathtaking views of the blue ocean and dramatic mountains in the background. Located in the south of Madeira, Funchal is on the sunniest coast with growing bananas and beautiful flowers blooming all-year-round under the shelter of the mountains. You can imagine how mesmerizing and relaxing it is to be surrounded by this peaceful green senary during the day, but find out how vivid and varied the nightlife in the city of Funchal can be. Funchal is also an ideal "off-season" location if you want to travel during Autumn or even in the winter. 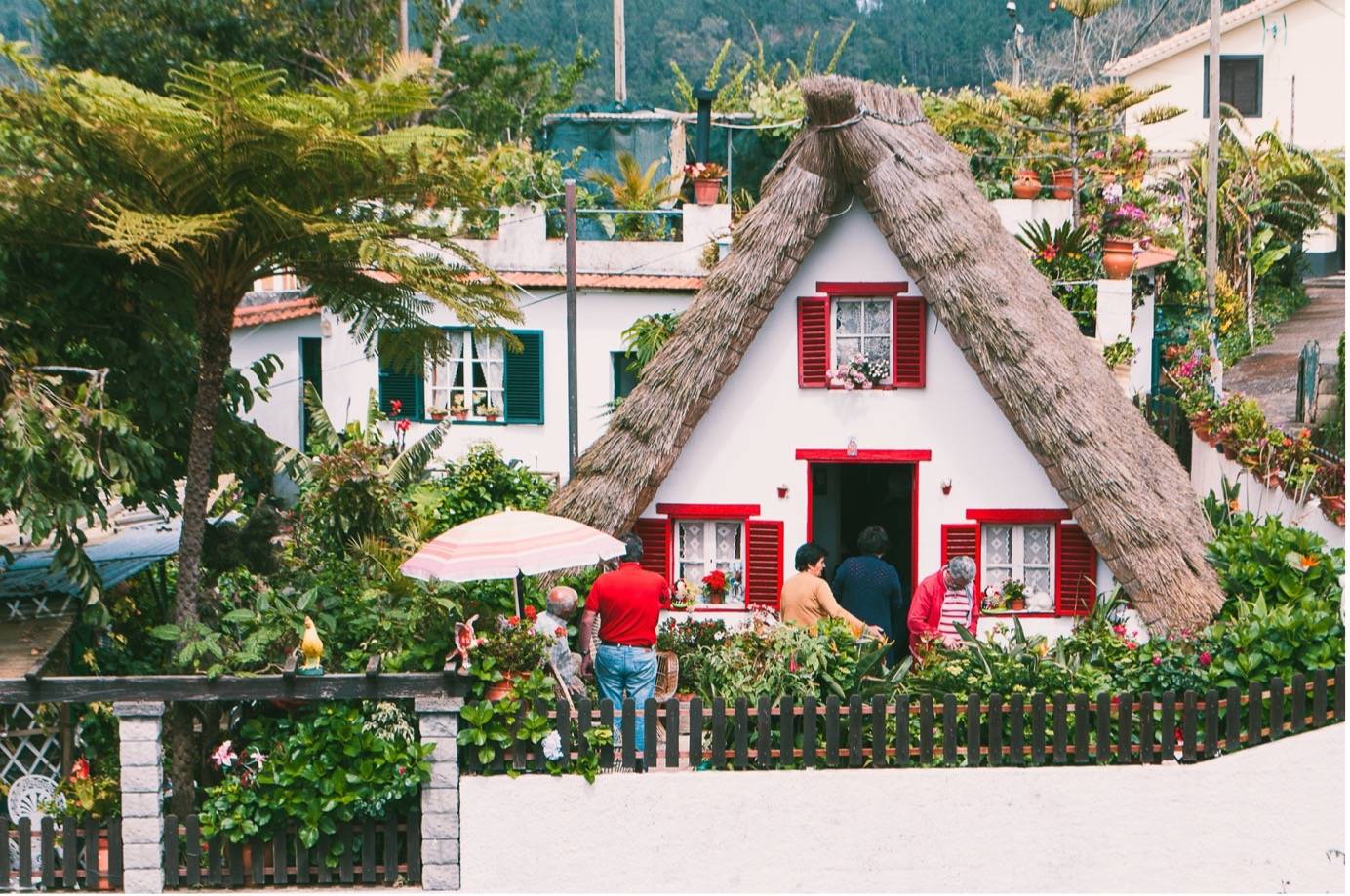 The City of History

Funchal, one of the safest cities in Europe with very clean and modern shopping and restaurants, has however a very long history dating back more than five centuries. The first Portuguese settlers settled on the coast, where fennel grew in great quantities on the sunny bay. The city owes its name to the beautiful fennel. The population began to grow and international trade soon attracted the attention of Europe. Exploring the island of Madeira means getting to know its historical culture, nature and architectural heritage. From the flourishing "sugar city" of the 15th and 16th centuries, numerous buildings have survived to this day. Most of this architectural heritage is located in the centre of Funchal, but the area is divided into three historic areas. These are "São Pedro", "Santa Maria" and "Sé". Explore the beautiful historic architecture and immerse yourself in Madeira's history!

Things to do in Funchal

Funchal has a lot to offer! Not only can you enjoy the good food, nature and architecture, but Funchal also has a great selection of beautiful and interesting gardens and parks, museums, architecture with history and festivals and events. If you are an outdoor adventurer, you can go horseback riding or play golf. There are two spectacular golf courses in Funchal, both with magnificent views and excellent conditions: Palheiro Golf and Santo da Serra Golf Club. You can also dive in the crystal clear waters, take a boat trip, surf the waves, swim with the dolphins, go whale watching, hike through the mountain forests or paraglide along the coast. There are endless possibilities!

Christmas and New Year's Eve are very special in Funchal. The city centre is transformed into a wonderland as lights and festive decorations light up the whole city. The "Nine-Day Mass" with its accompanying festivities and the Market Night on the day before Christmas Eve is unique and will get you in the Christmas spirit. On New Year's Eve, you will experience a night like no other when you see the fireworks, which according to Guinness World Records is one of the largest fireworks displays in the world! 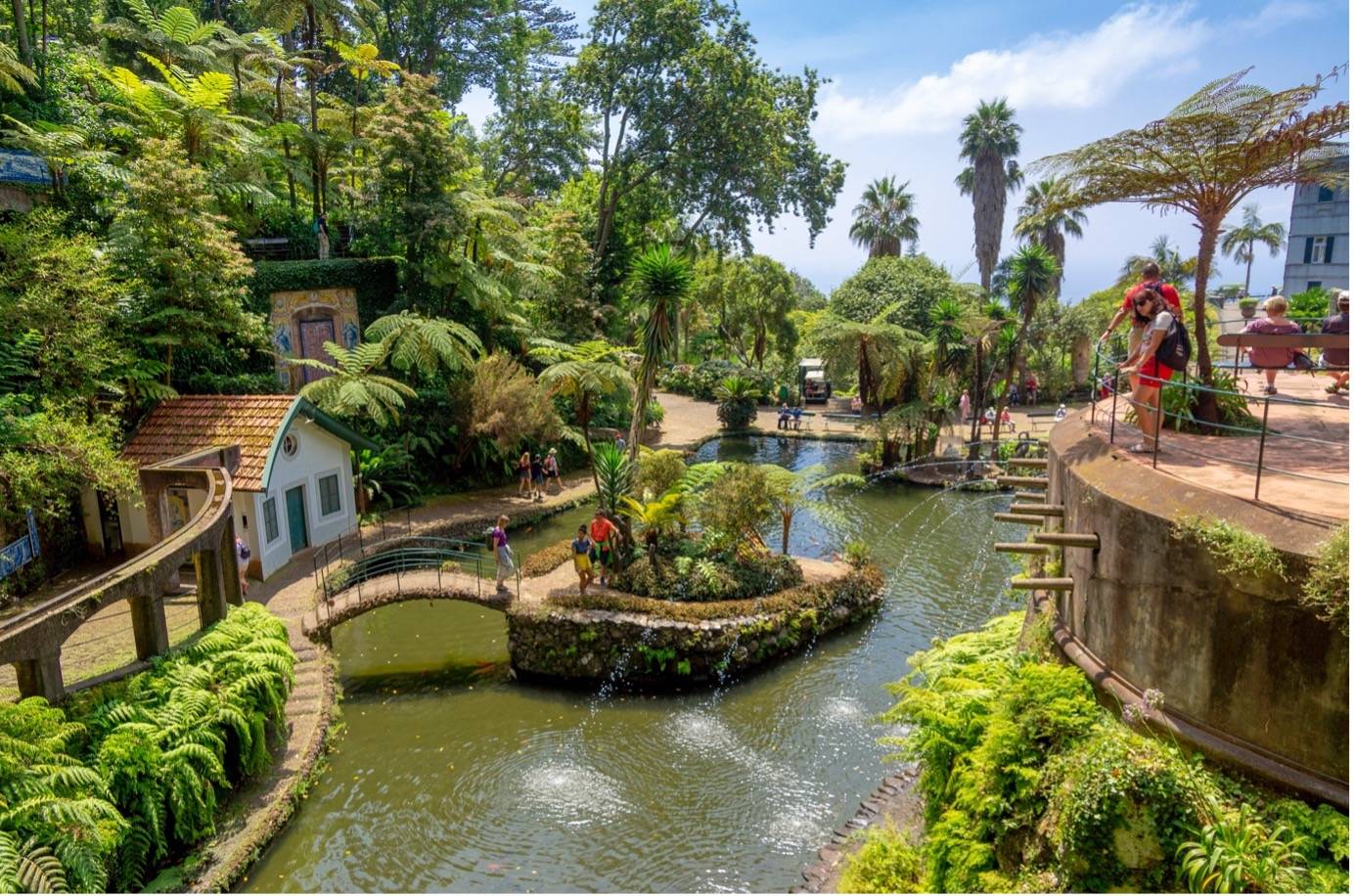 The Botanical Garden is stunning and should not be missed.

As we mentioned earlier in this article, Funchal has many beautiful buildings and churches from different centuries that have such a charming history. Colonial architecture can be found in Funchal's Old Town, such as São Tiago Fortress. It was built in 1614 to protect Funchal from another attack by pirates. In 1566 pirates attacked the island and many people were killed. In 1767 the fortress was expanded and used for military purposes. Since 1992, the fortress has been used only for cultural activities and now houses a museum, exhibitions and a restaurant. Colonial architecture can also be found in other areas of the city, such as the Sé Cathedral, Municipal Theatre Baltazar Dias, the Jesuit University and the São Lourenço Palace. Since its construction, the palace has served as a residence for many captains and governors of the island and then became a national residential palace. Today it serves as the residence for the Prime Minister of the Autonomous Region and the Military Command but also houses a permanent exhibition on the history and development of the fortress. The Town Hall, the Palace of the Governing Board and the Regional Legislative Assembly also reflect this colonial architecture. However, the architecture of the Regional Legislative Assembly combines ancient and modern styles, but you can see how seamlessly they fit together. It dates back to 1519 and was then called "The New Customs House" because the first Customs Office was housed in a different building. Madeira Legislative Assembly has had its offices in this building since 1982. Since its construction, it has been improved, remodelled and expanded several times. From the year 1686, the Palace of the Governing Board housed a hospital for the poor but was ceded to the Governing Board of the district in 1933. The building has some interesting architectural elements, such as Portuguese glazed tiles from the 17th century. 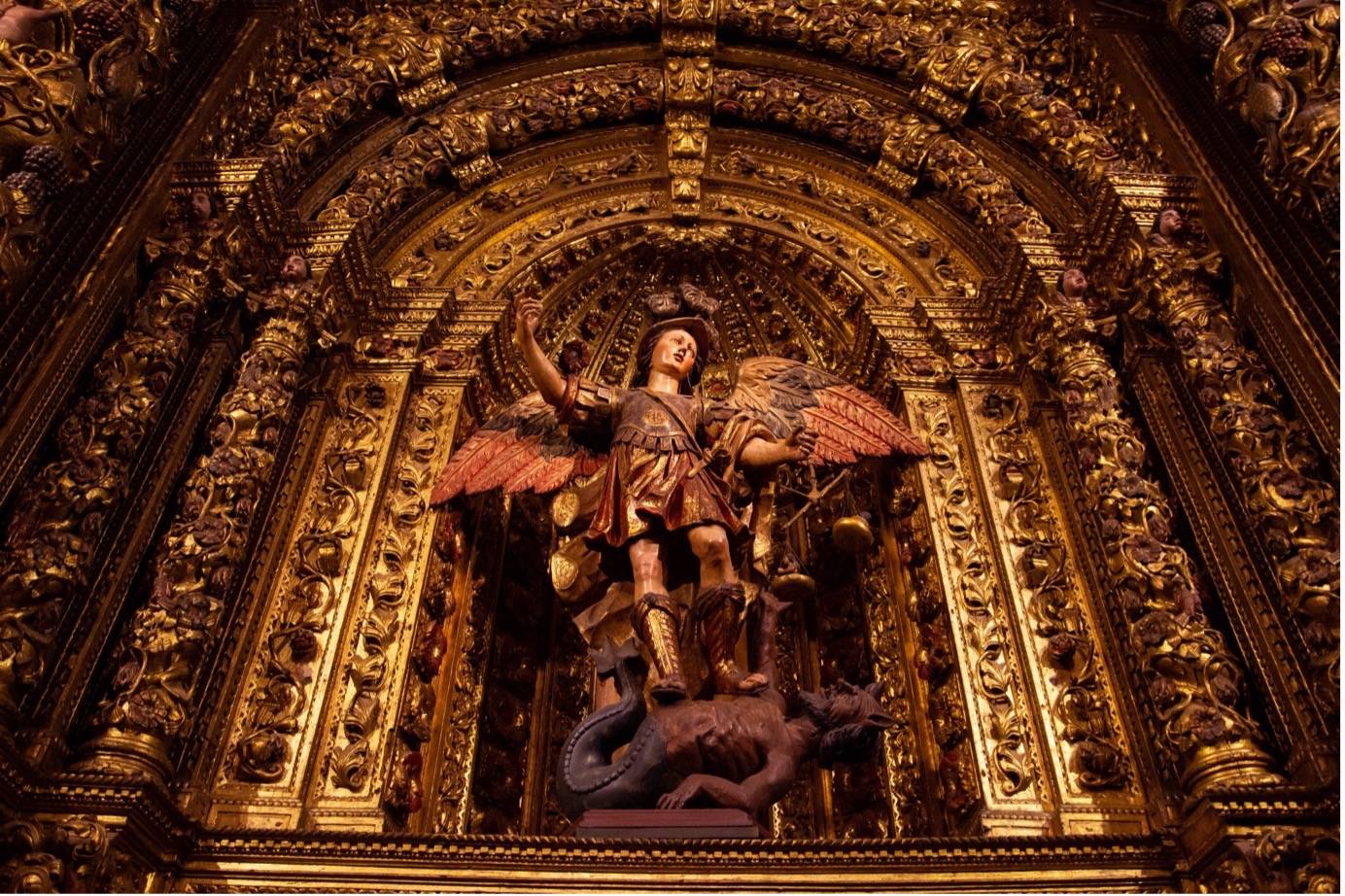 What could be better on vacation than enjoying a relaxing day at the pool or beach, cooling off in the tropical climate? We can't think of anything!

Lido Beach Complex is the most popular swimming spot in Funchal. It has a large and a small pool, which have received the "Blue Flag" award for good water quality, but you can also get direct access to the sea. The facilities are excellent and offer changing rooms, lockers, sunbeds and parasols, a first aid centre, lifeguards and a snack bar.

Ponta Gorda, like the Lido Beach Complex, is located in the Lido district. Its special location and the view of the beautiful Formosa beach will convince you if you decide to spend a relaxing day with your family at Ponta Gorda, as the pool area is very child-friendly. There are two swimming pools, a children's pool, easy access to the sea, changing rooms, nursery, sunbeds, a first aid centre and a snack bar and restaurant.

Just a few steps from the Ponta Gorda pools is Formosa Beach. There are three small sandy beaches and one large pebble beach. This beautiful beach attracts many people, both locals and tourists, not only for sunbathing but also for water sports activities. The water quality is certified by the "Blue Flag" and a team of lifeguards takes care of the safety of bathers. 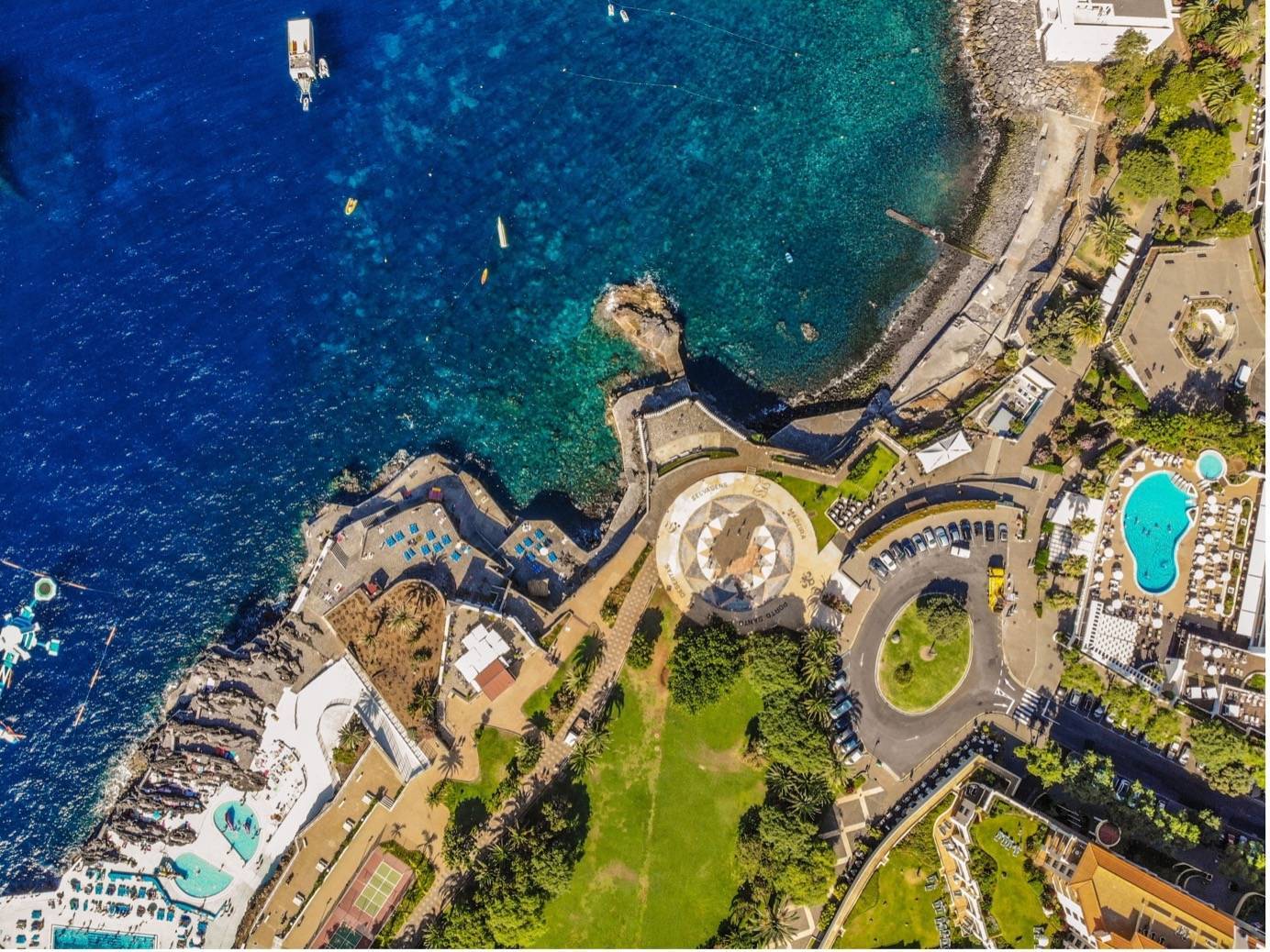 Doca do Cavacas consists of a natural pool and has easy access to the sea. The pool area is not large, but there are tunnels to take you to Formosa Beach if it gets too crowded. It offers basic facilities like changing rooms and restaurants and bars in the area. Although the pool area is small, the natural beauty of the rocks surrounding the pool is amazing.

At the end of The Old Town of Funchal is the Barreirinha Complex, which offers great conditions for visitors and whose water quality is certified by the "Blue Flag". Barreirinha offers a small pebble beach, a lifeguard, access to the sea, changing rooms, lockers, a first aid centre and a snack bar. Although it is small and offers a minimum of services, the view of the pier of the Old Town is very entertaining.

Funchal offers a wide range of museums. We have already mentioned a few of them, as many of Funchal's historic buildings and parks have a museum, but there are many more!
At the CR7 Museum, you can learn about the life story of Cristiano Ronaldo, a Madeiran football star and also one of the best players in the world, and see the trophies he has received in his football career. The highlight of the museum is the FIFA Ballons d'Or and UEFA European Golden Shoe awards he received.

Visit House-Museum Frederico de Freitas and you will be thrilled to see all the magnificent objects that Madeiran collector Frederico Augusto de Freitas collected in his time. You'll find almost everything from English-style furniture and paintings to pottery and an outstanding collection of glazed Portuguese tiles. And that's just a small sampling of the pieces on display. Although his house became a museum after his passing, you'll be surprised to know that someone still lives in the house!

You can learn all about Madeira's history in one place, at Madeira Story Center. The museum is located in the Old Town, which is very relevant because of Funchal's long history. It is very popular with tourists and visitors to the museum can take a virtual trip back in time and "experience" the major historical events of Madeira in historical order, from the volcanic formation 14 million years ago to the first seaplane landing in Madeira, from the time of Prince Henry the Navigator to Napoleon and Churchill.

Complete your perfect holiday in Funchal with a unique Madeiran experience and go on a Cable Car Ride over the city! This is an exciting way to see the hidden beauty of Funchal's hills and you can enjoy the breathtaking views of Madeira and the spectacular scenery in an eco-friendly way. The route is approximately 3,200m long, takes around 15-25 minutes and has an elevation gain of 580m. Each cabin can accommodate seven people and the reduced speed makes it easy for disabled passengers to board. Do not leave Funchal without experiencing this exciting sightseeing! 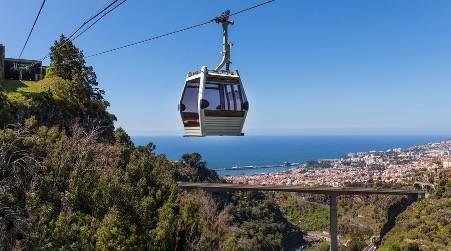 Another unique Madeiran experience is the Monte Toboggan Ride. Originally, these "sleigh rides" were a fast means of transportation for the residents of the Monte neighbourhood in Funchal in earlier times. Still, in use today and popular with tourists, these two-seater baskets on wooden runners glide you down the narrow, winding streets of Funchal at high speed. The sledges are pushed and steered by two men, traditionally dressed in white cotton clothing and a straw hat, using their rubber boots as brakes. The ride takes about 10 minutes for a total of 2 km and the speed is 48km/h at times. An adventurous but safe sleigh ride that you can not miss! 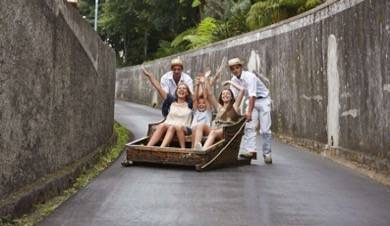