Find the best deals in Budapest

Budapest is the capital of Hungary. With an area of 525 square kilometres and around 1.7 million inhabitants, it is the 7th most populous city in the European Union. An important source of income for many Hungarians living there is tourism: Budapest attracts about 8.9 million international tourists annually. The city celebrated its 800th anniversary in 1988. To mark the occasion, the Hungarian Parliament building was built, which is still one of the city's most important landmarks, and the first metro line was opened.

The official language is Hungarian, which belongs to the Uralic language family and is very different from most other European languages. The main religion in Hungary is Christianity. Hungary has a market-based mixed economy, which until 2009 was one of the fastest-growing economies within the EU. World-famous tourist cities include Budapest, Kecskemét, Siófok and Szeged. Budapest is an important centre for music, film, theatre, dance and visual arts. The city has more than 20 museums, about 100 galleries and several theatres.

Budapest is a beautiful city with many tourists, so it makes sense to rent a car when you travel there. This is because public transport can be very crowded and difficult to use, especially in more remote places. It makes life much easier if you have your own transport, even if it is only for part of your stay. Driving in Budapest is safe, with each year it becomes even safer. Potholes are common in Hungary, meaning that it is important that you keep aware while driving to avoid unforeseen damages due to them. In urban areas of Budapest, the speed limit is 50km/h, in rural areas it is 90km/h and on motorways, it is 110-130km/h. Hungary has a zero-tolerance for drinking and driving. So you are not allowed to have any alcohol in your blood while driving in Hungary.

Most popular car hire at Budapest

The most selected hire car in Budapest is the Opel Corsa, with the Kia Picanto and Volkswagen Gold also being a popular options. The most popular car types in Budapest are Economy and Compact cars.

Want to rent a car for a one-way trip? No worries! Orbit Car Hire offers a variety of one-way Car Hire options in many locations outside of Budapest. One-way car rental is ideal for cross-town or cross-country travel, saving time by not returning to your original location. Start your reservation with Orbit Car Hire and find great options on one-way car hire at locations across the Hungary.

What to see in Budapest

Budapest is the capital and most populous city of Hungary. It has a great cultural heritage that can be visited by everyone and has many architectural styles that you may not see anywhere else.

The Basilica is one of Budapest's top sights. It stands out for its unique architecture and historical background. A visit to the Basilica can take half a day as there is so much to learn about it and enjoy its beauty. The Fisherman's Bastion is also not to be missed: it offers a breathtaking panoramic view of the entire city, especially at night when everything is illuminated. The Great Market Hall is an ideal place to buy souvenirs and gifts for your loved ones, while the Chain Bridge is a pleasant walk across the Danube to reach Buda Castle on the other side.

The Hungarian National Museum has an extensive collection of historical artefacts that should not be missed. A river cruise may be just what you need after a day spent wandering around Budapest: It offers relaxation and stunning views from the ship. There are so many things to do in this city, but if we had to choose just five, these would be them! 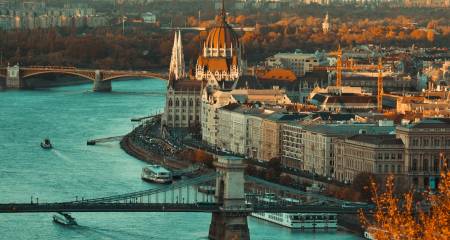