When comparing cheap car hire in Verona Airport, it is important to consider the type of vehicle you need. There are a number of different car hire companies at the airport, so it is important to compare prices and the service offered.
A number of different car rental companies have offices at Verona airport. This allows them to offer a wide range of cheap cars and luxury vehicles. When comparing prices, it is important to consider the type of car you want. The cheaper cars tend to have smaller engines, which can mean that fuel costs are higher than expected. It is also worth checking whether or not the price includes basic insurance and standard mileage. In many cases, additional charges such as tolls and parking fees are included, which you should take into account when comparing different offers.

Why rent a car in Verona

Where to pick up your Verona Airport rental car

Picking up your rental car at Verona Airport is an easy process when booking with Orbit Car Hire. You will find brands such as Locauto, Sicily By Car, Europcar, Ecovia, Autovia, Goldcar, and Enterprise to have rental kiosks inside or near the terminal.  You will find your rental car pick-up instructions on your voucher, you can also see it while searching for offers through Orbit Car Hire.

Verona Airport has a tourist information desk located in the arrivals hall. The agents on the information desk will also be able to provide all needed information about all car rental companies in Italy. So if you have any doubt after you land, simply walk to them and ask them for instructions on how to find your rental car in Italy.

Looking for a rent a car for pleasure or business at Verona Airport? With our search engine you can find low prices for all categories from economy to luxury, mini-vans to SUV's so you will be able to find the car that suits your trip. In the search engine at the top, you can enter your pick-up and drop-off locations. You will find low prices with no hidden fees, filter your preferred transmission type. Book online and help you with our customer support team by phone, email, or Live Chat. 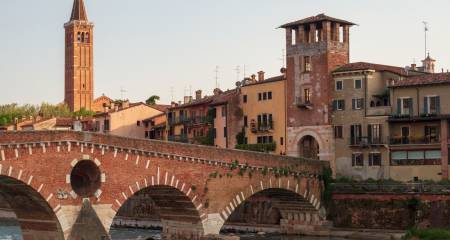