Find the best deals in Menorca

The island of Menorca lies to the west of the Balearic Islands and measures just over 53 kilometres in length. It is one of the best-preserved Mediterranean islands, thanks in part to the carefully planned development of tourism. Among other things, the construction of vacation accommodations has been restricted. In this way, it has been possible to preserve most of the rugged coastline, which in many places is still as the ancient seafarers knew it. The influence of the Franciscans and the Greeks, Carthaginians, Romans, and Moors can be felt on the island.

However, very little is known about the indigenous people, as evidenced by the many stone buildings scattered around the island. The most characteristic is conical stone layouts, reminiscent of defence towers or tombs, and talus stone foundations. Minorca is a small paradise in the western Mediterranean, a pearl surrounded by calm seas and protected by a friendly climate. With 216 km of coastline, Menorca has more than 70 beaches with fine white sand in the south and reddish tones in the north. The island is a true paradise for all walkers, cyclists, and lovers of beautiful beaches and turquoise sea.

The capital of Menorca is Mahon. There are two larger towns on the island, Ciutadella, the old island capital. In the city, the narrow streets are surrounded by palaces and churches and squeezed between medieval walls. Another large city is Mahon, located in the south of the island. In Mahon, Mediterranean architecture mixes with a touch of Moorish and British influences. The south coast is much more populated than the north. On the north side, the wind often blows and creates high waves, so surfers and kiters like to head for the north coast.

Menorca is a small island. From the capital Mahon on the east side of the island, you can be at the other end of the island, Ciutadella, in less than 50 minutes by car! So a rental car is the best way to explore this pretty island. The pristine beaches that Menorca is so famous for are usually just a short walk away from the nearby car parks.
Driving in Menorca is far less stressful than in other tourist locations. The road network is manageable and consists mainly of a few main roads, most notably the ME1, which runs from Mao (Mahon) to Ciutadella, and quiet, narrow side roads (camis). There are no motorways and very few dual carriageways.

The speed limit is 80km/h, slightly less than 50mph. The roads are in good condition and very well signposted; the road signs are standard throughout Europe. Generally, there are not many cars on the roads either, which makes driving very relaxing and makes it very unlikely that you will get stuck in a traffic jam. Many of the road signs are in English or marked. In Menorca, cars drive on the right side of the road.
It's good to know that Spain has strict drink-driving laws, allowing only 0.5 milligrams of alcohol per millilitre of blood - stricter than in the UK, where the limit is 0.8. Novice drivers are effectively banned from driving under the influence, with a very low limit of 0.1 mg/l. Front and rear seat belts are compulsory everywhere.

Most popular car hire at Menorca

The most selected hire car in Menorca is Ford Fiesta, with Renault Clio and Seat Ibiza also popular options. The most popular car types in Menorca are mini, economy, and compact.

If you are travelling in larger groups, you can also compare great deals for minivans with seats from 7 to 9. It is ideal for groups who would like to travel in one vehicle and still have plenty of space for luggage.

Want to rent a car for a one-way trip? No worries! Orbit Car Hire offers a variety of one-way Car Hire options in many locations outside Menorca. One-way car rental is ideal for cross-town or cross-country travel, saving time by not returning to your original location. Start your reservation with Orbit Car Hire and find great options on one-way car hire at locations across Spain.

What to see in Menorca

Menorca's greatest treasures are undoubtedly its beaches. Menorca offers many small coves and sandy paradises. Many different activities will delight the whole family. Menorca is also rich in historical attractions and can boast the oldest building in Europe, Es Tudons. But not all attractions are located on the island. Visiting the diverse underwater world on glass-bottom boats is very inviting. However, if you want to spice up your trip a little, try planning a holiday during one of the traditional festivals, where there is no shortage of dancing, local food, and entertainment.
The most important festival in Menorca takes place on St John's Day. An indispensable part of it is the black Menorcan horses and their elegant riders. The riders gallop to the larger island towns and mingle with the enthusiastic crowds. Ciutadella is the liveliest, but the festival occurs similarly in many smaller towns. Black horses can also be admired on other days of the year. At one of the fairs, at horse races, or, most beautifully, on a horseback ride through the vast flowering meadows.
Menorca is ideal for nature lovers and quiet holidays. The predominantly flat island with the highest elevation, El Toro - Taurus (358 m) is a true paradise for hikers and cyclists. And, of course, for sea lovers. Lovers of the excellent island cuisine, based on fish and seafood, also get their money's worth. Cheese, almond desserts (ensaimada), and island wines go well with it.

The turquoise sea, blossoming almonds and citrus fruits, fragrant rosemary, white sandy beaches, or secluded rocky coves in the shade of pine trees will enchant you. Binibeca, Cala en Porter, Cala Galdana, and Fornells are the most famous tourist coves. Fortunately, many coves have been preserved and are not built on. Many attractive beaches require at least a little effort. Sometimes there are car parks nearby. However, often only a macadam road leads to them.

The most beautiful beaches on the island:

Cala Mitjana: one of the most beautiful beaches on the island. Cliffs and pine trees surround a beach on the island's south side.

Son Saura: In the southwest of the island, very popular with families. Two sandy beaches, Banyul and Bellavista, are separated by a rocky point. Together, these two beaches form the largest cove on Menorca.

Cala Turqueta: The stunning white sandy beach with natural shade is another paradise in Menorca.

Es Talaier: Beautiful white sand and warm waters create a holiday paradise. In the high season, the beach is quite crowded, so it is recommended to visit it in the morning. 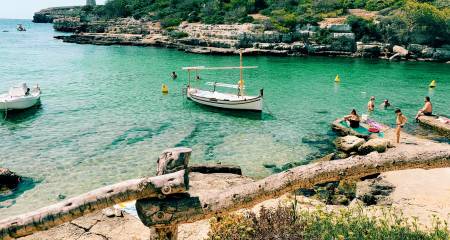