Find your rental car in Leeds

Leeds is a city in the county of West Yorkshire, England. The city is the largest in the county, with a population of 793,139.
Leeds was a small manorial borough until 1626, when it became a city and received its first charter as a borough. From then on, the town began to overgrow in the wake of the Industrial Revolution. From a market town in the valley of the River Aire in the 16th century, Leeds expanded and overtook nearby York in importance, absorbing the surrounding villages and developing into a crowded urban centre by the 20th century, gaining city status in 1893. Today, Leeds has one of the most diverse economies of any major city in the UK and is experiencing the fastest growth in private sector jobs of any city in the UK.
Leeds is the largest settlement in the historic Yorkshire region and is known for its many shopping arcades, such as Kirkgate Market. Leeds is the cultural, financial and commercial heart of the West Yorkshire metropolitan area. The city has a vibrant nightlife and is known for its wide range of bars, nightclubs and live music venues. It also hosts several festivals and events throughout the year.

As mentioned earlier, driving in winter in Leeds can be difficult. Roads in Leeds are generally well maintained, but potholes can be a problem, especially after severe storms. Therefore, it is advisable to be careful when driving. However, in general, Leeds is a safe city to go around.

Most popular car hire at Leeds

The most selected hire car in Leeds is the Fiat 500, with the Ford Fiesta and Kia Stonic also being a popular options. The most popular car types in Belfast are Mini and Economy car categories.

Do you want to rent a car for a one-way trip? No problem! Orbit Car Hire offers a variety of one-way rentals in many locations outside of Leeds. A one-way rental is ideal for travelling across the city or country and saves you time by not having to return to your original site.
As Leeds is a city in the middle of the UK, it is exciting to travel beyond Leeds. There are many fascinating cities you can travel to with your hired car, such as London, Manchester, Liverpool, Sheffield and many more! With the permission of the car hire company you work with, you can even take your rental car to other places like Scotland, Northern Ireland and Wales and start your little UK trip. The possibilities are endless!
Start your reservation with Orbit Car Hire and find excellent options for one-way car hire locations all over the UK.

There are plenty of great day trips that can be taken from Leeds. The Yorkshire Dales and the Lake District are both within easy reach for those who enjoy the outdoors. History buffs can head to York to explore its medieval streets and Viking past, while foodies will find plenty to tantalise their taste buds in the nearby city of Sheffield. With Manchester only a short drive away, there is something for everyone within easy reach of Leeds.

The Yorkshire Dales
The Yorkshire Dales is a national park in the UK covering 1,761 square kilometres of stunning countryside. The park is home to several picturesque villages and some of the country's best walking trails. The Yorkshire Dales are probably most famous for their limestone landscape of craggy hills and valleys created by erosion over millions of years. The area is also home to several important archaeological sites, including the remains of a Roman fort at Ribchester. Whether you are looking for a challenging walk or a relaxing stroll in the countryside, the Yorkshire Dales has something for everyone. So why not set off yourself to explore this beautiful corner of England? The drive will take about 50 minutes from Leeds.

York
York is a historic walled city in North Yorkshire, England. The city has a rich heritage and has been inhabited since Roman times. York is a popular tourist destination due to its rich history and heritage. York is home to several famous tourist attractions, including York Minster, the largest Gothic cathedral in northern Europe, and the National Railway Museum. The city also has a vibrant nightlife and is known for its festivals and events. If you are looking for a historic and vibrant city to explore, York is the perfect place for you. This wonderful city has something for everyone with its rich history, beautiful architecture, and lively nightlife.

Sheffield
Sheffield is a city in South Yorkshire. It has over half a million inhabitants and is the fifth-largest city in the United Kingdom. Sheffield is known for its steel industry, which began in the 18th century and made the town one of the most important industrial centres in the UK. Today, Sheffield is home to several universities, colleges, major businesses, and employers. The city also has a vibrant cultural scene with many museums, art galleries and live music venues. Sheffield has plenty to see and do, making it an ideal place to visit or live. The drive from Leeds to Sheffield takes about an hour.

Manchester
Manchester is a city and borough in Greater Manchester. With a population of 547,627, it is the fifth-largest city in the United Kingdom. In 2013, Manchester was the third most visited city in the UK after London and Edinburgh. The city is known for its architecture, culture, music exports, media connections, scientific and technical achievements, social influence, sports clubs and transport links. So a day trip to Manchester is worthwhile.

What to see in Leeds

There is a lot to see and do in Leeds! For those who enjoy the outdoors, there are several parks and green spaces to explore, including Roundhay Park, Temple Newsam and Otley Chevin. The Royal Armouries Museum, Leeds Grand Theatre and Kirkstall Abbey are great for history buffs. Art lovers should visit the Henry Moore Institute, Leeds Art Gallery and The Tetley. Families will enjoy a visit to Roundhay Park, Tropical World and Harewood House. Sports fans can catch a game at Elland Road Stadium or tour Headingley Carnegie Stadium. And for those who want to enjoy a good meal or go shopping, Leeds has plenty of restaurants and shops. Whatever your interests, you will indeed find something you like in Leeds! 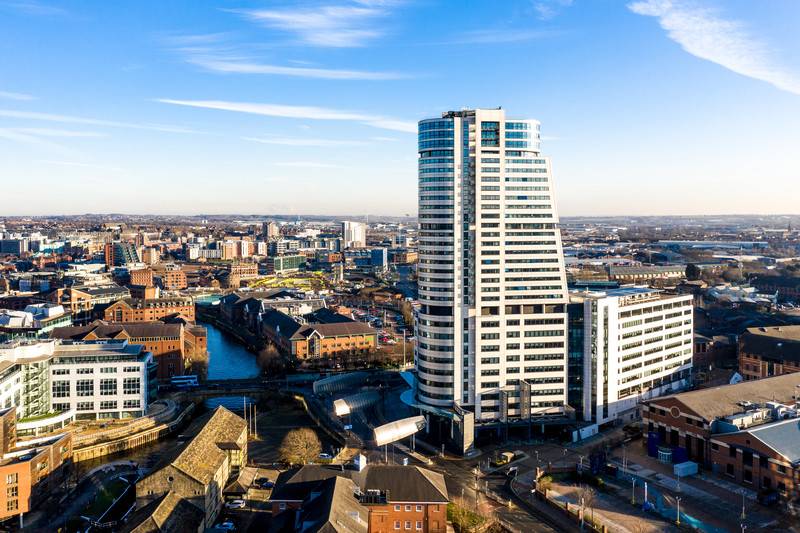 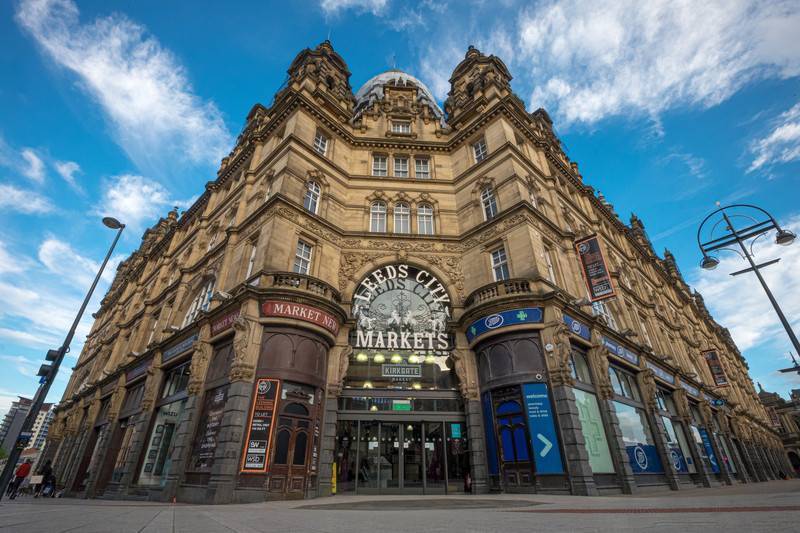 Where to eat, drink, and party in Leeds

There are plenty of great places to eat and drink in Leeds, UK. The city is the culinary capital of the North. In the heart of Leeds, there is a thriving independent food scene known for its diversity, energy and innovation. The passionate people are known for their craft and serving dishes you can be proud of. Here are just a few of the city's favourites.

Best restaurants and bars in Leeds

The Owl
The Owl is a small, relaxed yet lively restaurant in the city centre, just off Lockside next to the Leeds canal.
Modern British cuisine is served at the Owl, using the best local fish, meat and game. The Owl has a handful of covered tables for al fresco dining. The wine list is small but full of interesting examples of great wines.

The Restaurant Bar & Grill
The Restaurant Bar & Grill in Leeds is located in the Old Post Office building in the heart of City Square and offers a stunning setting for brunch, lunch, dinner or a private function. The restaurant has an open kitchen, wood-fired oven and rotisserie and emphasises good serving food in an informal and relaxed atmosphere. Guests can eat at the raised mezzo-share table, sit in the comfortable seating niches or watch the chefs at work from the counters next to the open kitchen. The impressive cocktail bar, with its charismatic bar team, offers a sophisticated environment to enjoy a refreshing Sapphire Cosmopolitan or Mojito. In the summer months, dine al fresco in the square, watching the hustle and bustle of the city while enjoying the extensive menu of eclectic dishes.

HOME
With its friendly and relaxed atmosphere, HOME is a fine dining restaurant in the heart of Leeds. Under the direction of Chef Patron Elizabeth Cottam, she and her team create an ever-changing and extempore collection of eight to ten-course menus, making it one of the most exciting and unique restaurants in the city.

The Crafthouse
The Crafthouse showcases the best of British produce, taking inspiration from the history of Leeds and Yorkshire. Located on the fifth floor of Trinity Leeds, the restaurant offers regularly changing seasonal British menus and spectacular views over the city. The Crafthouse pays homage to Leeds' rich culture and heritage, emphasising outstanding quality food and wine.

The Turk's Head
The Turk's Head offers 14 beers on tap representing the modern British craft brewing scene and an exceptional selection of premium spirits, wines and cocktails, all in a stylish and comfortable setting designed by Lord Whitney. The bar is located at the top of Turk's Head Yard.

Jake's Bar
Jake's Bar has long been known for the quality and selection of our cocktails and mixed drinks. Our current list includes a selection of our favourite creations from recent years, a good helping of timeless classics and some more experimental combinations we have put together from our unique Distilled Spirits of Leeds. 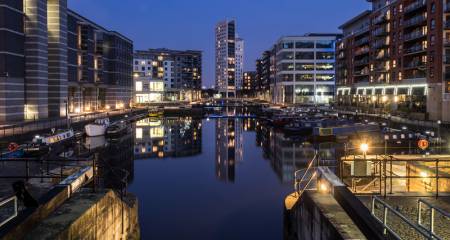