Top 10 Longest Roads In The World

If you're looking for an epic road trip, look no further! Here's a list of the ten longest roads in the world, perfect for the adventure-seeker in you.

There are many long roads globally, but some are longer than others. Here is a list of the ten longest routes in the world, ordered from longest to shortest.

The Pan-American Highway is a road network that stretches from Alaska to Argentina. It is the most extended road network globally and has a total length of about 30.000 kilometres. Therefore, the highway is also known as the Pan American Freeway or Pan American Road.

The Pan-American Highway was first proposed in 1915 and took more than 50 years to complete. The highway officially ended in October 1971, when a final section between Panama and Colombia was opened. Today, the route is used by millions of people every year.

The Pan-American Highway is an important transport link for North and South American countries. It enables the fast and efficient transport of people and goods between different countries. The highway has also played a role in promoting economic development and cultural exchange between countries in the Americas. 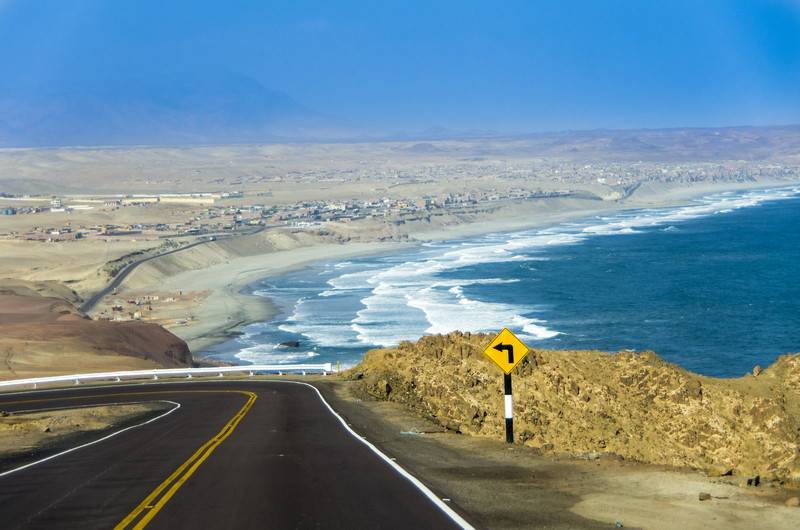 Highway 1 is one of the most popular tourist routes in Australia. Stretching from Sydney to Perth, the highway passes through some of the country's most beautiful and scenic areas. There is plenty to see and do along the route, making it the perfect destination for a road trip. Highlights include the dramatic coastline of Victoria, the vineyards and wineries of South Australia and the rugged beauty of Western Australia. There are also many small towns and villages to discover, each with its unique character.

The Trans-Siberian Highway is a highway system in Russia that stretches from St. Petersburg in the west to Vladivostok in the east. At over 11.000 kilometres, it is the longest highway in the world. The route passes through some of Russia's most remote and beautiful areas, including Lake Baikal, the largest freshwater lake in the world. Construction of the highway began in the early 20th century and finished in the 1950s. Today, the motorway is an essential link between western and eastern Russia and a popular tourist destination. 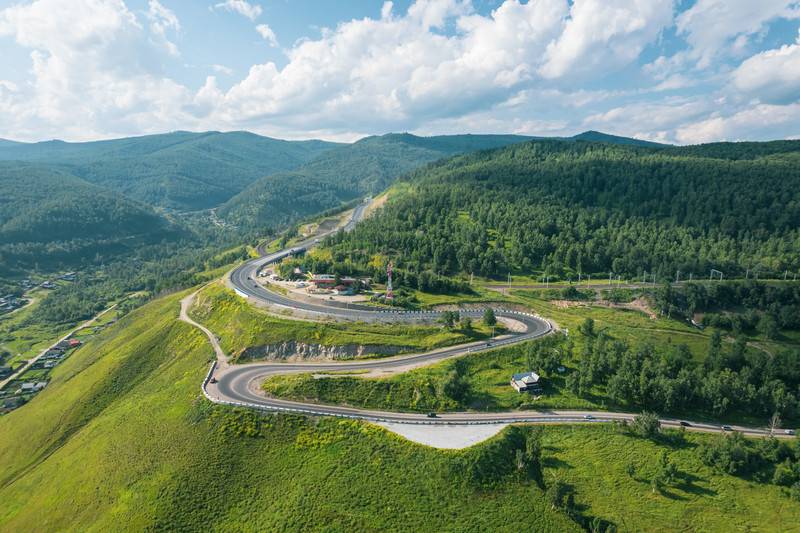 One of the world's longest roads takes 8.445km going from China to St.Petersburg in Russia.

The Western Europe-Western China Highway was designed to promote trade and economic cooperation between Europe and Asia. However, the highway has also become an important transport route for people and goods between the two regions. In recent years, traffic on the road has increased significantly as more and more people and businesses take advantage of the convenient and cost-effective route. The Western Europe - Western China motorway is an essential link in the global transport network. It is sure to play a crucial role in the future growth of the worldwide economy.

The Trans-Canada Highway is a 7,821-kilometre highway that crosses the entire country of Canada. It connects the Pacific and Atlantic Oceans, making it one of the longest highways in the world. The route splits into 20 sections, each with its unique features. Some branches are mountainous, while others are in rural areas. There is always something to see and do no matter where you are on the highway.

The Trans-Canada Highway is a popular tourist destination for a good reason. There is so much to see and do along the route. Whether you are interested in nature, history or culture, you will find something that appeals to you. The scenery is also breathtaking, especially in the Rocky Mountains section.

Suppose you plan a trip to Canada, including the Trans-Canada Highway in your itinerary. It's an experience you will not soon forget.

China National Highway 010, commonly referred to as G10, is the second-longest national highway in China. It stretches 5,854 kilometres (3,644 miles) from west to east across the country, connecting nine provinces between Lanzhou, Gansu in the west and Hangzhou, Zhejiang in the east. It also passes through five autonomous regions: Xinjiang, Inner Mongolia, Ningxia, Tibet and Qinghai.

The highway crosses some of China's most remote and least developed areas. However, it also crosses some of the country's most beautiful landscapes, including the Qinling Mountains, the Greater Khingan Range and the Yellow Mountains.

The G10 is one of China's busiest highways, carrying a significant passenger and freight traffic. It is also an essential link for trade between the west and east of the country. As a result, the Chinese government has invested heavily in upgrading the G10 and building several new motorways and tunnels to improve its safety and efficiency. 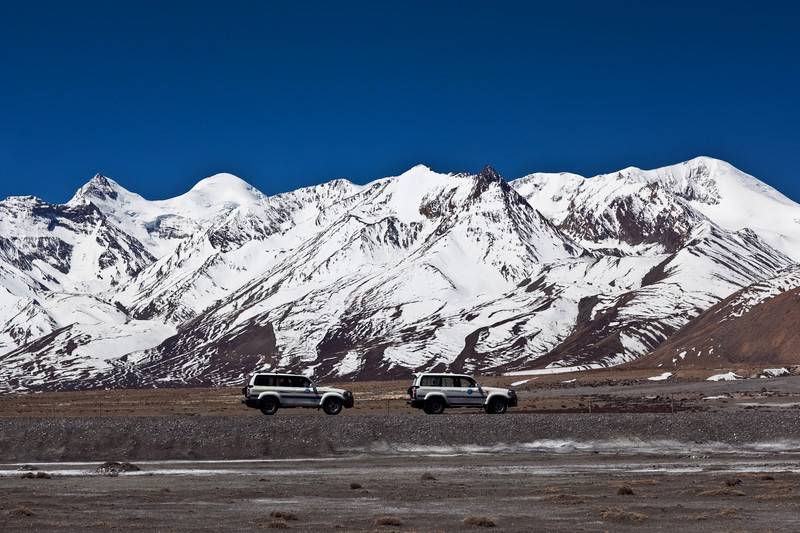 Route 20 is a scenic route that begins in Boston, Massachusetts and ends in Newport, Oregon. This route passes through some of the most beautiful areas in the United States, including the Berkshire Mountains in Massachusetts, the Catskill Mountains in New York, and Oregon's Rocky Mountains. There are many interesting towns and attractions along the way, including Niagara Falls, Mount Rushmore and Yellowstone National Park. Travelling on Route 20 is a great way to see some of America's most stunning scenery.

Route 6 is a historic highway in the United States that stretches from coast to coast. The route was named in 1926 and has been in use ever since. Today, Route 6 is a major thoroughfare for tourists and locals alike.

The western terminus of Route 6 is in Bishop, California, on US Highway 395, from where the highway heads east through Death Valley and across the Mojave Desert. Route 6 crosses the Colorado River near Needles, California, and continues through Arizona and New Mexico before ending at its eastern terminus in Galveston, Texas.

Motorists can enjoy some of America's most beautiful scenery along the route. From the deserts of California and Arizona to the rolling hills of New Mexico and Texas, Route 6 offers something for everyone. And with so many towns along the way, there's always somewhere to stop for a bite to eat or spend the night.

I-90 passes through or near major cities such as Albany, New York; Buffalo, New York; Cleveland, Ohio; Chicago, Illinois; Sioux Falls, South Dakota; and Spokane, Washington. Much of I-90 follows the old routes of US Route 10 and US 12.

In many places along its route, I-90 is recognised by other names, such as the Ohio Turnpike and the Indiana Toll Road. I-90 has some sections with fast lanes. The shortest section of I-90 is between Youngstown, Ohio, and Cleveland, Ohio, where the speed limit is 70 mph (113 km/h). 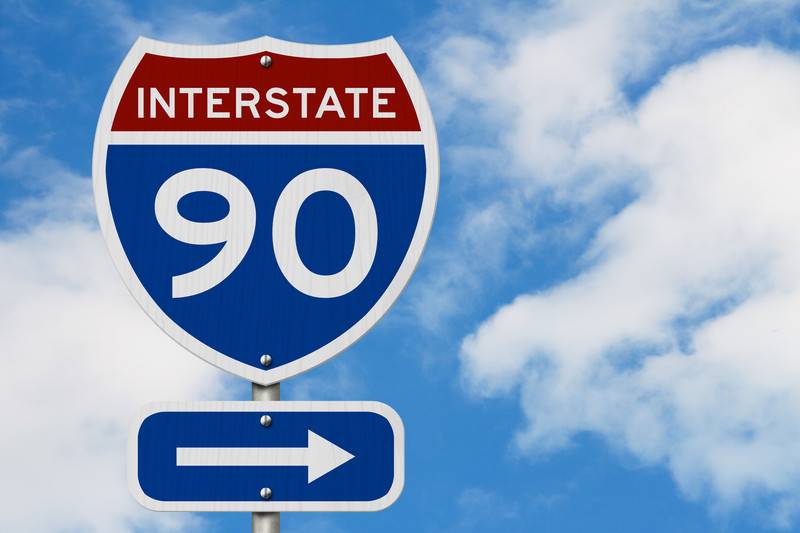