El Hierro is the smallest and most southerly of the Canary Islands and the youngest. It has an area of 431 square kilometres (about 166 square miles) and a population of 10,000. There are three towns on El Hierro: Valverde, the capital, Frontera and La Restinga. The coast has many volcanic formations.

The history of El Hierro is like that of the other Canary Islands. There was a prehistoric settlement from around 2000 BC, and around 100 AD there was a Phoenician-Punic culture. The island then became Carthaginian, Greek and finally Roman again. In the 8th century, after the Moorish conquest, El Hierro had to endure tribal wars and Moorish raids.

Driving on El Hierro is not for the faint-hearted, as the roads are unsystematic and lack signage. There are only two main roads, but they are not well signposted and local drivers are likely to take you in the wrong direction. Many roads in Valverde and San Andres have no names or numbers and most roads are single lanes. Slow down and be prepared to stop frequently to wait for oncoming traffic, as the road is often just enough for two cars.

It takes about 60 minutes to drive around the island without stopping. There is an excellent bus service that you can board in any of the major towns. The most popular tourist destination is the Mirador del Río.

There is a zero drink-driving policy in El Hierro. The maximum alcohol level in the blood can be 0.05% (BAC) which is lower than in the UK. And the police do have regular checks so it's good to keep in mind.

The most selected hire car in El Hierro is the Nissan Micra, with and Seat Ibiza also being a popular option. The most popular car types in El Hierro are mini and economy cars.

Want to rent a car for a one-way trip? No worries! Orbit Car Hire offers a variety of one-way Car Hire options in many locations outside of El Hierro. One-way car rental is ideal for cross-town or cross-country travel, saving time by not returning to your original location. Start your reservation with Orbit Car Hire and find great options on one-way car hire at locations across the Canary Islands.

What to see in El Hierro

The island of El Hierro is the smallest of all the Canary Islands and is known for its ecological value. Everywhere on the island, you can see unique plants that exist nowhere else in the world, such as the "Romero de las Indias" (Erio moschata).

The island has several white-sand beaches, like "Las Salinas" in the south of the island or "Playa de la Laja" in Valverde. Moreover, many people come to El Hierro to practise sports such as snorkelling and diving thanks to the beautiful coasts.

The island is a tourist destination, but it has kept its "Canarian" authenticity. Therefore, the people who live there are incredibly friendly and you will easily be able to get in touch with them.

Places like Valverde, the town of Morro Jable, are very touristy areas of the island because of their restaurants and hotels.

Another great thing about El Hierro is that there is a lot of cultural heritage, like the windmills in Frontera or the Celtic cave paintings in Boca de Jaruco. 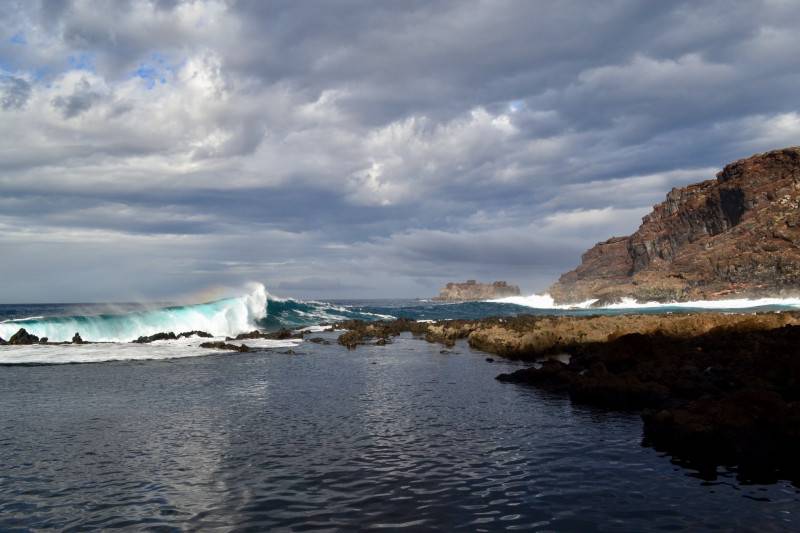 Where to eat, drink, and party in El Hierro

El Hierro, the smallest of the Canary Islands, is not known for its gastronomy. Its cuisine is based on seasonal products and traditional recipes that have been passed down from generation to generation. The island has just over 10,000 inhabitants who live from agriculture, fishing and tourism. It is worth mentioning that it is one of the few places in Europe where you can still eat wild boar and mountain goat.