Find the best deals in Pula

Pula lies on the eastern coast of Istria (Croatia) and was built on a rocky peninsula with an excellent natural harbour. Today Pula is one of Croatia's major ports for ferries across the Adriatic Sea to Italy. The population of city proper has 37 362 people while there are around 60 000 residents in its wider metropolitan area. You can learn more about Pula history here.

Istria is situated in between Venice and Trieste further north-west resulting in cultural influences from both sides which you'll be able to easily discover upon arrival. There will also be some German influence as Austria borders Istria on the North-Western edge and Slovenian on the West.

You can easily access Pula by plane or bus from major cities in Croatia such as Zagreb, Split and Rijeka. There are also plenty of international connections with flights arriving from all European capitals including London, Paris and Amsterdam.

Pula is a great place to start your Croatian adventure if you're planning larger trips into neighbouring Slovenia or Bosnia & Hercegovina. We'd recommend larger cities like Ljubljana or Sarajevo but those visits require much more time. Istria itself has a lot to offer as well so it's a perfect jump-off point for smaller road trips to picturesque towns like Motovun, Opatija, Rovinj and Porec.

Driving in Pula, and Croatia, in general, is very good. The road condition is known to be in excellent shape all year round and all roads have all the signs clearly visible, also on highways. It is very unlikely that you will experience difficulties while driving in Croatia, and if anything were to happen the locals are known to be very helpful and friendly. Finding gas stations in Pula and Croatia is also easy as you will find them very frequently, offering both petrol and diesel.  The gas price in Pula and Croatia is known to be very reasonable.

Driving a car in the city of Pula is not a problem as there are no limitations or signs indicating that you cannot enter certain areas with your vehicle. The only inconvenience might be parking spots but even those can easily be found, so it should not be much of an issue. In case you do need any assistance regarding driving there, don't hesitate to contact us at Orbit Car Hire, we'd gladly help!

When you're looking for car hire in Pula, it is important to consider how old the driver must be. In some countries and at Orbit Car Hire we will always find prices with young driver fees included so that all ages can rent our vehicles! In Pula, you need to be at least 18 years old to rent a car, and with some car hire suppliers, the maximum age to rent a car is 75 years of age. This can differ between car hire companies as well as car categories. Please note that young driver fees may apply to people under 25 years of age, this can also vary between companies and car categories. The speed limit on the motorway is 130 km/h (81 mph). On normal roads the speed limit is80 km/h (50 mph), on urban roads, it is 50 km/h (31 mph), and on all other through roads, there is a speed limit sign. You should know before driving in Pula that it's important to follow the law with respect to drinking and driving. For all people under 25 years old, there is a strict zero-tolerance for any level of alcohol (BAC) within their system; while drivers over 25 have an allowed maximum limit at 0.5%. This difference between British standards means you should keep this information handy when renting cars on holiday or making plans around transportation options such as public transport in order not get caught out!

Most popular car hire at Pula

The most selected hire car in Pula is the Volkswagen Up, with the Fiat Panda and. Renault Clio also being a popular option. The most popular car types in Pula are the mini, compact and economy car hire groups.

Travelling in groups is simple at Pula. You can rent a 9 seater car hire with Orbit Car Hire at Pula. The Renault Trafic and Mercedes V-Class offer 9 seats and a large luggage space suitable for large groups.

Want to rent a car for a one-way trip? No worries! Orbit Car Hire offers a variety of one-way Car Hire options in many locations outside of Pula. One-way car rental is ideal for cross-town or cross-country travel, saving time by not returning to your original location. Start your reservation with Orbit Car Hire and find great options on one-way car hire at locations across the Croatia.

A day trip to Motovun with your rental car is a great Idea.  Motovun is located in central Istria and has wonderful restaurants, coffee shops and little stores that are perfect for stocking up before you go on your journey through this beautiful region of Croatia! The views from the village itself are breathtaking too - no wonder people come here year after year just so they can take it all in again; there's nowhere else quite like it around these parts...

The Opatija is a hidden gem of the Adriatic Sea and it's located in Kvarner Bay. It was once known only as an expensive resort, but now people are beginning to find out that it deserves its place among other popular destinations along the coastlines!

The Opatija is located near the islands of Krk and Cres which are also worth visiting if you have time. The city has an old historical part within small streets, where people still live and there's a lot to see – it's wonderful! The coast that forms the Bay of Kvarner stretches 60 km from Umag to Novigrad and it's full of other wonderful places.

The area around Opatija is especially known for its numerous health resorts, that have been popular since the early 1900s. This is not the only thing that the Opatija is famous for though! The city has a long tradition in sports, culture and entertainment with two open-air theatres, a permanent circus and many other things. The Opatija Riviera is known for its excellent conditions for sports, recreation and relaxation.

The Opatija has some hidden beaches among the cliffs but they are worth visiting! There are also several famous hotels where celebrities often visit to enjoy some luxury after their long working hours.

Imagine the serenity of an isolated fishing village in Istria, Croatia. Rovinj offers a quaint and relaxing atmosphere with old buildings that are very close together all along its ports-residents often enjoy getting away from it all on one of those beaches you won't find too many people at (South Lone Bay is usually less crowded). If your travel plans include taking in this beautiful part of Croatia then be sure to plan ahead as prices tend higher here than in other areas around Pula because visitors know they'll have privacy when visiting such special places

Porec is a paradise for anyone who wants to enjoy both the city and beach life at their own pace. There are so many things that you can do in Poreč, like exploring ancient ruins or strolling along with one of its beautiful beaches while watching dolphins swim by! With wonderful sunsets, amazing food options like gelato at an open-air market or chicken kebabs cooked on skewers right off of your plate while watching people play music in front of you as they dance through sunset glow. The people here have been living with this sort of accessibility since Roman times when it became an important trading port on Adriatic Sea trade routes linking Italy's booty back home through Africa.

What to see in Pula

Pula is such an amazing city that has so many great things to see and do. First and foremost is the Pula Arena, The Arena is an ancient Roman amphitheatre that was constructed over three centuries, from 27 BC to 68 AD. It's one of six large surviving Arenas all around the world and stands out for its four side towers which also have not been destroyed like many others because they were made with more resilient materials than most other buildings at this time period such as stone or brick rather than wood like we know today

The Brijuni Islands, a group of 13 small islands in the Croatian part of northern Adriatic are known for their natural beauty. The largest island is Veliki Brijun which lies off Pula and has been joined to another smaller but gorgeous one before separation due artificial canal dug during the 19th century. One such place that gives tourists an idea about how this paradise used to look like back then when it was a single landmass - Vela Gorica Island; you can find their old houses built on wooden stilts over water as well wide fields all around them no matter what time period we're talking about: Roman Empire era up until the present day. The Brijuni Islands are a small archipelago in the Croatian Adriatic Sea, known for their beautiful beaches and Mediterranean vegetation. The islands preserve an interesting history dating back to Roman life on Stari Grad Plain (old town) around 1st century BC until 4th Century AD; they have been included in UNESCO's World Heritage Sites List since 1979 when this area was designated as a national park with many other preserved remains from Antiquity like villa Romana or many other historic monuments found within its borders including shipwrecks which give people vital information about how the trade worked before modern times

The Arch of the Sergii is a triumphal arch in the heart of Pula's biggest and most famous landmark: The Arena, built as part of emperor Vespasian's plans to develop the city. The two identical arches are located between the amphitheatre's entrance corridor and the east side of its arena. 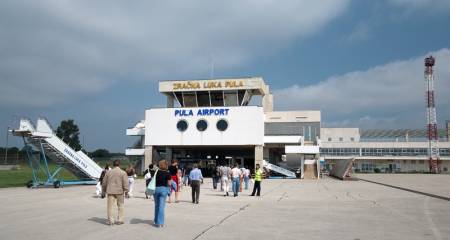