Find the best deals in Almeria

Almeria is the capital of the Andalusian province of the same name and is located in the southeast of the Iberian Peninsula. Caliph Abd al-Rahman III founded the city in 955 and it quickly became a rich port from which silk, oil, and wine were exported. Today, Almeria is a popular tourist destination boasting beautiful beaches, architecture, and the only desert in Europe, among other attractions. Almeria is also considered the city with the lowest rainfall in Europe and at the same time the second warmest city with an average temperature of 19 degrees Celsius. Temperatures below zero have never been recorded in Almeria.

If you have decided to visit Almeria, you will definitely not regret it. Besides the beautiful beaches, there are a lot of attractions worth seeing in and around the city. One of the biggest attractions is certainly the Wild West Territory, as many call it. Almeria was a popular filming location for Hollywood productions in the '60s and '70s. Many of Sergio Leone's westerns were filmed here, and the original locations built for the films Little Hollywood, Fort Bravo, and Western Leone can be seen.

Another great advantage of Almeria is that despite its growing popularity with tourists, the town is not too crowded. A stroll through the city will definitely impress you. Another advantage of this pearl of Andalusia is free tapas, or at least the snacks you get in the pubs when you order a beer. The city has a rich history and a mixture of different religions, mainly Islam and Catholicism, which is reflected in the architecture. However, the city was often the target of attacks during wars, both during the Spanish Civil War and World War II. This in turn left underground tunnels, some of which are now open to tourists. The city also has very interesting and varied nightlife. For those who like to dance, Almeria has a variety of clubs and bars with a variety of music styles to suit all tastes. The city also hosts various festivals, concerts and other cultural events. If you coordinate your trip with one of the festivals or concerts, you will leave with even more enthusiasm for this beautiful city.

But you should definitely visit the beaches as well. One part of the city is Zapillo beach, where there are also bars and restaurants so you will not go thirsty or hungry. You can also rent a kayak or take a scuba diving course at the beach. Just outside the town is the Cabo De Gata Natural Park, which also includes a unique coastline with beautiful beaches. There is hardly any vegetation in the park and this mix of desert look and sea is really something special. You can also explore the park on horseback, which is also a wonderful experience.

To drive a car in Almeria, you must be 18 years old, have a valid driver's license, and show valid proof of insurance for the vehicle you are driving. In Almeria,, vehicles drive on the right-hand side of the road. The speed limit on the motorway is 120 km/h (75 mph). On normal roads the speed limit is 90 km/h (75 mph), on urban roads, it is 50 km/h (50 mph), and on all other through roads, there is a speed limit sign.

If you are caught speeding in Almeria, the Spanish police act very quickly, and lack of Spanish is not considered an excuse. The police do not mind that you are a tourist on holiday, and fines are often issued immediately unless you can prove that you are a permanent resident in Spain. If you receive a fine, make sure the officer gives you an official receipt and if you pay immediately, the fine is usually reduced by 20%.

Most popular car hire at Almeria

The most selected hire car in Almeria is Ford Fiesta, with Renault Clio and Seat Ibiza also being a popular option. The most popular car types in Almeria are mini, economy, and compact.

Want to rent a car for a one-way trip? No worries! Orbit Car Hire offers a variety of one-way Car Hire options in many locations outside of Almeria. One-way car rental is ideal for cross-town or cross-country travel, saving time by not returning to your original location. Start your reservation with Orbit Car Hire and find great options on one-way car hire at locations across the Spain.

What to see in Almeria

La Alcazaba is a Moorish fortress and the second largest Muslim fortress in Andalusia after the Alhambra in Granada. It dominates the city mightily and consists of three fortifications, each built at a different time. The first was built to protect against enemies and, in a sense, to protect the inhabitants. The second was built a hundred years later and provided a residence for the ruler. The third and most recent, like the first, was for the defense of the city and the residence. Within the fortress of La Alcazaba, houses and a mosque were also built.

These are the ruins of an 11th-century Muslim fortress located very close to La Alcazaba. An interesting mix of Islam and Christianity can be seen in the way it was constructed.

East of Almería lies this natural park that encompasses an entire cape and the rocky volcanic landscapes within. With less than 200mm of rainfall per year, this is the only subtropical desert in Europe, but you'll be amazed at how much there is to see and do here: You could climb the highest peak, El Fraile, a long-extinct volcano that stands 500 meters high and offers magnificent views of the sea and coastal settlements. The park also has abandoned mining villages and secluded beaches that you can almost have to yourself. There are signs of natural life everywhere, especially on the salt marshes near the headland where thousands of large flamingos congregate.

Nine meters underground are tunnels that were dug in 1936 and provided a refuge from German bombing raids. Today, these underground tunnels are housed in a kind of museum where you can learn more about the Spanish Civil War in addition to the German bombing of Almeria, as part of these underground tunnels were excavated during the Spanish Civil War and also served as a shelter or refuge for the inhabitants.

In this attraction not far from the town of Tabernas, north of Almería, you can live out your Western fantasies. Mini Hollywood has a set that was built in 1965 for the spaghetti western For a Few Dollars More ( Sergio Leone) and was used a year later for the other classic, The Good, The Bad, and The Ugly. After filming was completed, the extras banded together to buy the set and keep it as an attraction. You'll see cowboy stunt shows and can-can dancers in the town square, and you can walk the promenade or cool off in the cells of the town jail.

This mighty-looking cathedral dates from the mid-16th century, replacing a predecessor that was destroyed by an earthquake in 1522. It was built at a time when the Mediterranean coast was under constant threat of pirate raids North African Barbary, which explains the high defensive walls and the lack of openings on the façade. The building is a mixture of Gothic, Renaissance, Baroque, and Neoclassical elements added over the centuries, and is listed in Spain. One of the oldest elements inside is the choir with 75 seats carved from walnut over three years.

And of course, we can not forget the beaches. In Almeria and its surroundings, you have a really wide choice of beaches and each one is worth a visit. The length of the coast of Almeria is more than 30 km and includes more than a dozen beaches, for every taste.

La Fabriquilla is a popular sandy beach with a clear sea. It is just over 0.5 km long.

Almadraba Monteleva - a small sand and pebble beach with a beautiful view of the church and the bay with fishing boats.

Las Salinas - considered one of the best and most beautiful beaches in Almeria with white sand and clear sea. Its length is 5 km and its width is 100 km.

San Miguel is one of the most visited beaches in Cabo de Gata. Its length is more than 2 km.

Las Amoladeras - one of the urban sand and pebble beaches with a length of more than 3 km.

Nueva Almería - one of the most important and popular beaches in the city.

San Telmo is a beautiful sandy cove set between cliffs.

La Garrofa is the westernmost beach in a small cove between the cliffs. 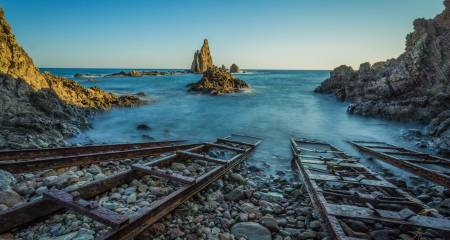