Find the best deals in Barcelona

Barcelona is located on the coast of northeastern Spain. It is the capital and largest city of the autonomous community of Catalonia, as well as the second-most populous municipality in Spain.
The city of Barcelona is so diverse that everyone can find something for themselves here. The place is friendly and just big enough. After a few days of walking the small streets, you will feel that the city has accepted you as its own and you will feel at home in it. There is something new lurking around every corner. Hidden corners, squares, and parks are so numerous that you will never run out of them while exploring the city. Divided into districts, it stretches from the sea to Tibidabo Hill. Each district is unique, with its peculiarities and rhythm of life.
As soon as you arrive in this city, you will be taken in by the architecture, which is an essential part of the city's charm. Barcelona is a unique combination of old and new. Gaudi, Picasso, and Miró had a huge impact on the city and made their artistic creations a part of the city's heritage.
One of the interesting things is that the city is incredibly easy to recognize from a bird's eye view. It has a unique layout unlike any other city in the world. Due to its location by the sea, it has been one of the most popular European resorts for centuries

If you have decided to explore more of Catalonia and discover other beautiful places, beaches, towns, and villages outside Barcelona, then a rental car is the best solution for you. A car is also very useful to explore the city of Barcelona if you do not like the crowded public transport. In 2020, the city of Barcelona adopted new regulations to ensure a better environment for its citizens. Zona de Baixes Emissions (ZBE) - Barcelona Low Emission ZoneThe ZBE - the Barcelona Low Emission Zone - covers the urban area of Barcelona (excluding the industrial areas of Zona Franca, Vallvidrera, Tibidabo and Les Planes), Sant Adrià del Besòs, L'Hospitalet de Llobregat, Esplugues de Llobregat and Cornellà de Llobregat.
Access is only permitted with an environmental badge. The entry restrictions for the ZBE apply from Monday to Friday from 07:00 to 20:00.
Cars with petrol engines must meet at least the Euro 3 standard, and diesel at least the Euro 4 standard. Motorcycles and mopeds Euro 2. Older vehicles are not allowed to enter permanently. There are exceptions for special vehicles, e.g. cars of people with disabilities or emergency vehicles.

What to see in Barcelona

The most famous street of Barcelona is certainly the Carrier de la Rambla. It stretches from the monument Christopher Columbus at the sea via Piazza Catalunya to the interior of the city. Plaza Catalunya is a suitable starting point for further explorations of the city. On the left side of the street is the old town called El Raval, which is considered the poorest and not so clean part of the city. But maybe that's why it's more authentic and not so crowded with tourists.

La Sagrada Familia is a cathedral designed by the Catalan architect Antoni Gaudi. Although unfinished, the cathedral is under UNESCO protection. Today it is the most visited building in all of Spain and has held this record for years.
Construction of the cathedral began in 1882, and the following year Gaudi took over the project. He changed it and put his distinctive stamp on it, combining the Gothic style and Art Nouveau with curved shapes. The entire cathedral is built of stone. It is scheduled for completion in 2026, the centenary of Gaudí's death.

Parc Guell is a public park with a complete system of gardens and unique architectural features. It is located at Mount Carmel in the La Salut area, near the Gracia district of Barcelona. The long-standing friendship between Count Eusebi Guell and Antonio Gaudi led to this unique park. What inspired Gaudí were the natural forms, which is more than obvious. So there are no rectilinear shapes. In the park itself, there is also the house where Gaudi lived, which today has been converted into a museum with very interesting furniture designed by Gaudi himself.

This house, also known as La Pedrera, located at Passeig de Gracia 92, is another of a series of works by Antonio Gaudi. Characteristic are the walls and floors, which are not built at right angles. The façade is authentic and is made of stone. In 1984 it was declared a World Heritage Site and placed under the protection of UNESCO.

This famous building is located in the centre of Barcelona. The local name for this house is Casa dels ossos, which means house of bones. The roof is designed like the back of a dragon or dinosaur, which is very striking. A large part of the facade is decorated with ceramic tiles whose colours range from dark gold to green.

Here is the largest aquarium in Europe and the most important in the entire Mediterranean. In 80 m glass, tunnels are leading through the ocean, which in turn houses 4000 species of fish, including the main attraction - sharks.

In summer, the long beach is crowded with locals and tourists, who sunbathe under colourful umbrellas. The swimming season lasts from April and even until the end of December when the sun's rays are still strong enough for slightly braver swimmers. In autumn, which of course starts later in Barcelona than here, Barceloneta turns into a surf spot.

Plaça Espanya is home to some of the city's most famous tourist attractions - for example, the famous magic fountains, which offer an unforgettable water dance experience with music and colours every night. Thousands of tourists flock to this place every night to enjoy the show of magical fountains after sunset.

Here you will find the famous Arena - the former venue of bullfights, now converted into a large shopping mall with many restaurants, as bullfights have long been banned in Barcelona and all of Catalonia.

For fans of FC Barcelona, but also all football and sports fans in general, a visit to the stadium Camp Nou in Barcelona - with 100,000 seats the largest stadium in Europe - is a must. Inside the stadium, you can also find the FC Barcelona Museum, with all the numerous trophies that Barça has won, including El Clásico. 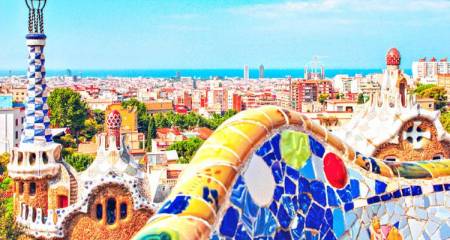 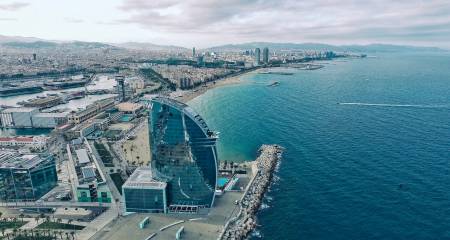