Find your rental car in Graz

Graz is the second-largest city in Austria after Vienna and famous for its university, which was founded as early as 1585. This may give you an impression of tranquillity and beauty, but Graz has much more to offer than just that. The city has a spectacular architecture that dates back centuries. There is a fantastic nightlife with many bars and restaurants for every taste and budget. And in summer there are also many green spaces where you can meet for picnics or sports. All this makes Graz a good place to study and live, but also a good place to work.

Driving around Graz is a real pleasure. The city was recently named the best city in the world for drivers. It is both easy and cheap to drive around the city. There are different speed limits depending on which road you are driving on, but there are plenty of signs to help you keep up. Parking is also made easy for you, as there are monthly parking permits that make it easy and cheap to park at your destination or anywhere else that is convenient for you.

When renting a car, read the fine print in the contract about where you are allowed to take the car. Many rental companies prohibit drivers from taking rental cars to Eastern European countries. If you do this anyway and get caught, the consequences are extreme. Speed limits are 30 to 50km/h inside built-up areas, 100km/h outside built-up areas, and 130km/h on motorways.

In winter, roads in alpine areas can become dangerous due to snow, ice, and avalanches. Some mountain roads may be closed for extended periods. Between November 1 and April 15, the use of winter tires is mandatory. All-season tires meet the requirements if they are marked M S and have at least 4 mm of the tread. In addition, the local police may prescribe snow chains during or after heavy snowfall.

Most popular car hire at Graz

The most selected hire car in Graz is the Fiat 500, with the Volkswagen Polo and Volkswagen Golf also being a popular options. The most popular car types in Graz are mini and economy.

9 Seater car hire in Graz is also a great option for those travelling in large groups. You can get a rental car van with up to 9 seats and large luggage space. Similar to Volkswagen Transporter.

Want to rent a car for a one-way trip? No worries! Orbit Car Hire offers a variety of one-way Car Hire options in many locations outside of Graz. One-way car rental is ideal for cross-town or cross-country travel, saving time by not returning to your original location. Start your reservation with Orbit Car Hire and find great options on one-way car hire at locations across the Austria.

What to see in Graz

The city of Graz is the second-largest in Austria. Much of its centre is part of the UNESCO World Heritage Site. It combines Baroque architecture, including fine examples of Rococo, Gothic and Romanesque churches, with other architectural styles from the last thousand years. Graz also has an excellent university with a long history dating back to 1585.

Graz is famous for its historic centre and old squares such as the Dreifaltigkeitsplatz with beautiful churches, a monastery and the baroque Karl Franzens University of Graz. The most important sights are the Landhaus, the City Hall, Eggenberg Palace and Herrengasse with its famous shops. In front of the Styrian Parliament, there is a statue of Archduke Karl, Duke of Teschen, who saved Graz from being sacked by Napoleon's troops in 1809.

For architecture lovers, there are buildings from different eras, from Gothic to Baroque and Neoclassicism to Biedermeier. Eggenberg Palace is a particularly impressive sight, as it was built in the Baroque style but also has elements of the Renaissance, such as magnificent frescoes and marble halls decorated with paintings by famous artists like Tintoretto, Guido Reni or Antonio Viviani.

Drive your rental car beyond Graz

The most popular attractions are the Schlossberg with the Graz Cathedral, the museum district with the Kunsthaus Graz or, for example, the Looshaus, but there are countless galleries, museums and churches everywhere, so you'd better start planning your route through them before you set off. Also worth mentioning are some theatres such as the Volkstheater or the Bodenbauer Theatre, where spectacular musicals are often performed, and the Odeon Theatre for more intimate performances. You do not need to worry about accommodation either, as there are plenty of hotels in Graz, especially near the city centre. If you prefer to stay elsewhere, you can always rent a flat or try one of the many campsites nearby. The best way to explore this beautiful city is by bike, which you can easily rent in the city. Rent a car and discover all the hidden gems outside Graz, where peace and seclusion are still possible even though you are only moments away from the vibrant city centre. 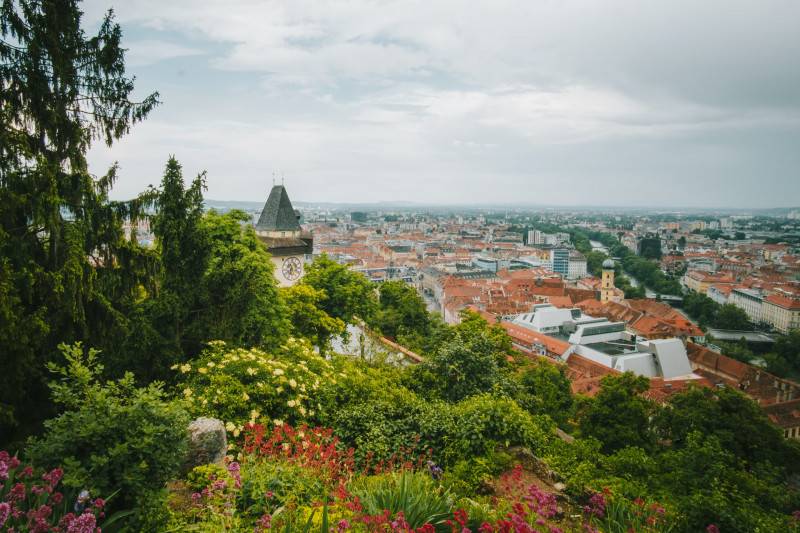 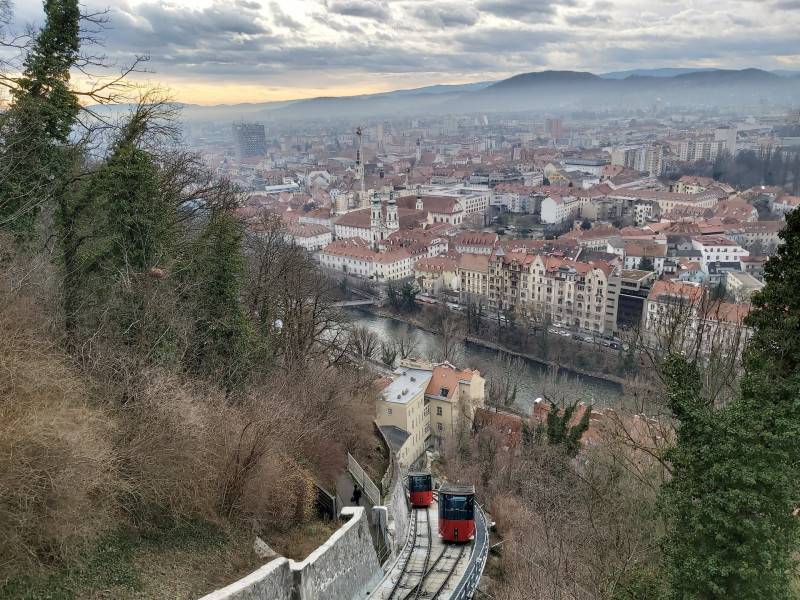 Where to eat, drink, and party in Graz

it's easy to say that Graz, Austria, has one of the best culinary scenes in all of Europe. From traditional Austrian cuisine to French and Italian dishes to trendy new restaurants that seem to open every month, it would be hard not to find something good to eat here. The city centre is full of small cafés where you can stop for a quick bite or enjoy a cup of coffee while people-watching along the way. 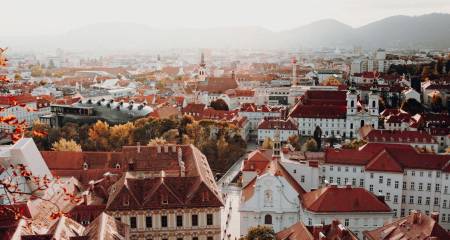