Salzburg is considered one of the most important cultural capitals in the world, and the old town has been declared a World Heritage Site. This is also the reason why, besides Mozart's balls, cultural events, museums, and stunning architecture are the first association most people have with the thought of Salzburg. The city lies near the border with Germany, just north of the Alps and at 425 meters above sea level.

Right-hand traffic and compulsory wearing of seat belts in the front and rear seats. You need an international driving license to drive in Austria, but if you are in the country for more than six months you'll need to get an Austrian license. As in most western countries, drink driving is illegal and the penalties are substantial. The minimum fine is around 360 euros and the loss of your driving license. The maximum blood alcohol level is 0.05.

When renting a car, read the fine print in the contract about where you are allowed to take the car. Many rental companies prohibit drivers from taking rental cars to Eastern European countries. If you do this anyway and get caught, the consequences are extreme. Speed limits are 30 to 50km/h inside built-up areas, 100km/h outside built-up areas, and 130km/h on motorways.

In winter, roads in alpine areas can become dangerous due to snow, ice, and avalanches. Some mountain roads may be closed for extended periods. Between November 1 and April 15, the use of winter tires is mandatory. All-season tires meet the requirements if they are marked M S and have at least 4 mm of the tread. In addition, the local police may prescribe snow chains during or after heavy snowfall.

Most popular car hire at Salzburg

The most selected hire car in Salzburg is Volkswagen Polo, Opel Astra, and Volkswagen Golf also being a popular option. The most popular car types in Salzburg are economy, compact, and Intermediate.

Want to rent a car for a one-way trip? No worries! Orbit Car Hire offers a variety of one-way Car Hire options in many locations outside of Salzburg. One-way car rental is ideal for cross-town or cross-country travel, saving time by not returning to your original location. Start your reservation with Orbit Car Hire and find great options on one-way car hire at locations across the Austria.

What to see in Salzburg

Salzburg's Old Town is a landmark that every visitor to Salzburg visits, whether they spend a few days or just a few hours in the city. Along the Salzach river, which you can cross over one of the many bridges (for couples there is also the "bridge of lovers" Makartsteg with its famous locks), you will find the Old Town, which will enchant you the most when you visit it for the first time in the evening when decorated shop windows and Christmas decorations give it a special charm.

Do not use a map to walk through Salzburg's old town, but let your imagination run wild in the many squares where Christmas markets are held and in the narrow streets where you can hear the music of street musicians and which are lit up by abundantly lined shop windows and Christmas lights.

One of its hallmarks towers over Salzburg - the mighty Hohensalzburg Fortress. It is the largest completely preserved fortress in Central Europe and dates back to the 11th century. It stands on the small hill Festungsberg and at the same time can probably be seen on every postcard of the city of Salzburg. Most visitors reach the fortress by cable car, which allows you to replace the hustle and bustle of the city with a quiet sit on the castle walls and a view of all of Salzburg. Hohensalzburg is also a popular destination for photographers, who can take beautiful panoramic pictures from the walls both during the day and in the evening.

Practically only the Salzach and a row of houses separate Mozart's birthplace in the Old Town and his later residence. Wolfgang Amadeus Mozart was born on 27 January 1756 in his birthplace in the famous Getreidegasse. His birth has left its mark on the city of Salzburg forever, as his image can be found everywhere today.

The house where Mozart was born houses numerous documents and portraits of the Mozart family, as well as Mozart's instruments on which he played music from an early age. In one of the rooms, visitors have the opportunity to sit on a couch in a secluded space and listen to Mozart's compositions.

Red Bull Hangar-7: The entire museum is housed in a large hangar that houses Red Bull Formula 1 cars, helicopters, planes, motorcycles, and even a Felix Baumgartner "capsule" and equipment from his famous jump from space. If you are a little luckier than us, you can see the entire hangar from the panoramic glass-floored bar located at the top of the hangar. 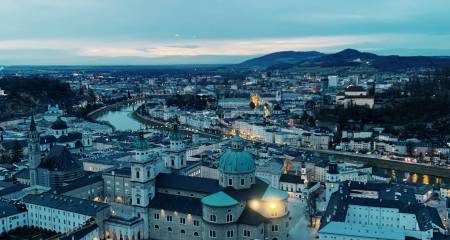