Nimes is a very charming French city. It has a mighty Roman amphitheater that attracts tourists.

The Roman road Via Domitia was built through the city and connected the territory of the then Roman provinces of the Apennines and Iberian Peninsulas. Many tourists stop in the city to visit one of the best-preserved Roman aqueducts - the Pont du Gard.

Pont du Gard
It is one of the best-preserved ancient Roman aqueducts and one of the most magnificent remains of the Roman Empire. Built-in 19 BC, it was part of an aqueduct almost 50kilometers long that ensured that water from the Fontaines d'Eure springs reached the Roman city of Nemausus (modern Nîmes).

The bridge was built without mortar, some of the stones weigh up to six tons, and all were carefully shaped to form together with a truly solid and impressive structure. The Pont du Gard was inscribed on the World Heritage List UNESCO in 1985.

The bridge was built on three levels. It is 49 meters high, the longest level is 275 meters long. The entire aqueduct drops only 17 meters along its length, while the bridge slopes only 2.5 centimeters, which testifies to the incredible precision of the Roman engineers, even though they used only the simplest technology.

There are three major French roads in France: Autoroutes, National Roads and departmental roads. Autoroutes is the fastest option and in English, this road is called a highway, motorway or freeway depending on where you are coming from. Department roads is a good choice if you are not in a hurry and also want to enjoy scenic routes. It's a good choice for exploring new towns along the way and getting a glimpse of the vast French countryside, as this road mostly passes through towns and villages. National roads are the usual shortest routes between major centers such as ports, cities, and airports.

It is true that in such a small town as Nimes, it is very convenient to walk, as you can reach most of the attractions on foot. But if you do not like walking, remember that you can always hire a car through Orbit Car Hire, which is definitely a good way to get around Nimes The next option is also to travel by bus, as they go pretty much everywhere from Monday to Sunday, even on holidays.

What to see in Nimes

In Nimes, you will find several amazing and breathtaking places. Because of its mix of history, architecture, and modern life, it is a must-stop for anyone traveling through the South of France. Here are some of the places we highly recommend you visit:

Stroll through the historic center with its beautiful streets, where you will find the Crocodile Fountain. You should also visit the street of the merchants and the street of the aspic.
A must-stop is Nimes Cathedral: A beautiful Roman Catholic cathedral. It is believed that the cathedral was built on the site where the Temple of Augustus was first built.
The Temple of Diane is another attractive destination in Nimes, located within walking distance of the Jardins de la Fontaine. This temple was not actually a temple, but was originally built as a Roman bath and later converted into a church. Unfortunately, this building was hardly damaged during the religious wars.
The Jardins de la Fontaine are beautiful gardens that are considered one of the finest attractions in Nimes. They were laid out in the 18th century and have life-size statues, which adds to their beauty. A beautiful fountain and various canals, as well as all the attributes mentioned above. 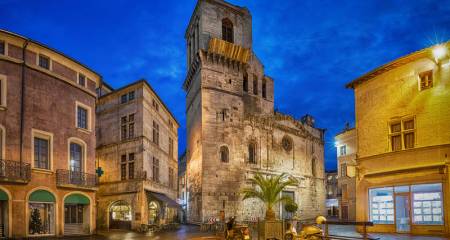